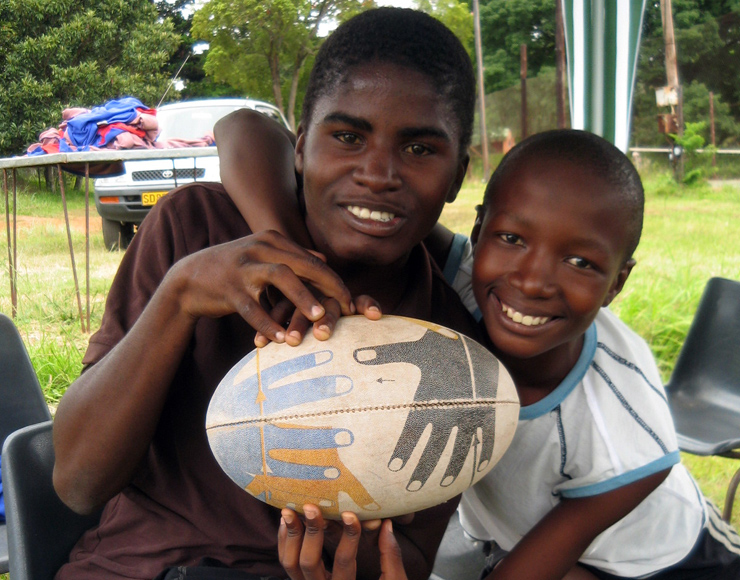 Last month our Director, Sam Eve, headed south to see how rugby is making a big impact on the lives of young people in Swaziland as they struggle to come to terms with a worrying HIV/AIDS epidemic that now infects more than 1 in 3 of the country’s population. Read Sam’s Report below:

One thing that struck me about Swaziland was just how lush, green and beautiful the country was. The people also seemed so much happier and less stressed in contrast to those living in the dirty and overcrowded townships of Port Elizabeth from where I’d just come.

However behind the beauty and the smiles hides a much sadder truth. The truth that 1 in 3 of the population are dying of AIDS. Swaziland has now surpassessed Botswana as the country with the highest prevalence of HIV/AIDS in the world. A staggering 39% of the population are infected with the disease and many don’t even know they are infected. Those that do know often cannot afford the treatment or know where to get it from. Those that don’t know continue to infect others. Cultural ‘norms’ in the country further accentuate the problem. Each year the King of Swaziland takes a new wife. Some men with HIV/AIDS still believe that sleeping with a virgin will cure them. Incest and domestic violence are common place. As a result, women are very much seen as second rate citizens and so the cycle of poverty continues. For young Swazi’s growing up under this black cloud, the future is bleak.

That is why United Through Sport are working with a local grassroots partner called SKRUM who are using rugby to tackle the increasing HIV/AIDS epidemic and promote greater gender equality to young people throughout Swaziland.

SKRUM works by training up to 2 teachers in every primary and secondary school to become rugby coaches. These teachers are given all the coaching resources they need such as training manuals, balls and pumps to help them establish the sport within the school. The teachers are then given information provided by NERCHA (the National Emergency Response Council for HIV/AIDS) and SWAGGA (a charity dedicated to tackling domestic violence against women and children) and guidance from SKRUM on how to deliver this information to their students informally through the game of rugby and off the pitch. Rugby simply provides the vehicle in which to deliver this information as well as an opportunity to develop important life skills in the children such as teamwork, sportsmanship, fitness and self-esteem. The physicality of the game also works in challenging the tradional role of women in Swazi society and works towards breaking down the stereotypes that currently exist.

In my visit to Swaziland I was hugely impressed by the dedication of the SKRUM team and how quickly they have moved the project forward in only a few months. Whilst only in their first year, SKRUM has received interest from over 90 schools keen to adopt the programme. Sport is a major motivator for children to attend school and as such Head Teachers are keen to add rugby to the curriculum.

As more and more schools come on board, it will be possible to develop a schools rugby league bringing the community closer together and re-enforcing the positive values of SKRUM.