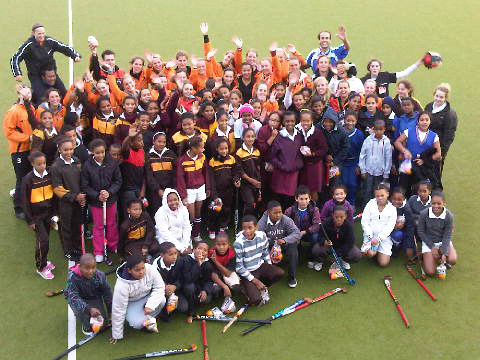 On the 07th August 2012, United Through Sport was pleased to host Were Di Tilburg, a Dutch Hockey team on a South African tour. A total of 39 people were with the group; which consisted of two girls’ teams and the coaching staff.

The girls had been on tour for a few days before visiting our organisation and had been playing against some of the best schools in the country. Our visit would be slightly different for the girls though; we would give them some insight to the less fortunate areas of our country; get them to mingle with children in disadvantaged schools, do some coaching with them and exchange cultural values and beliefs.

Before getting to the Junior School of Excellence (JSE) for a coaching clinic, we took the group on a township tour, which included a visit to a local museum and a visit to a “Sangoma” (an African traditional healer). A couple of the girls and staff got dressed up in the Sangoma dress code, which was quite a beautiful sight and an awesome experience for them!

At the JSE the Dutch players got involved in mentoring session where the girls taught the kids some Dutch songs and games and had a good time; learning a bit more about their backgrounds. The girls were a bit emotional and really had a heart-warming session with the kids, they came out of the session with a different perspective on life; they all seemed to be on a mission to complain less and appreciate more in life as their eyes were opened up to the hardships people face daily within our communities. At the end of the session, lunch was served for everyone and the girls moved on to the second part of the coaching before their matches with the Gelvandale semi-professional hockey teams.

The last part of the day before the matches was coaching at the Gelvandale hockey turf, which the girls enjoyed very much and got them ready for their matches later that evening. The atmosphere was amazing at the clubhouse, with the Dutch players feeling right at home hearing Afrikaans, which is very similar to Dutch! Were Di Tilburg junior girls won their game while the senior took a beating from the local team. The presentation after the matches was an amazing time for both teams to bond. Gifts were exchanged and the two clubs wished each other well and good relations were built, in the hope of crossing paths again in the near future. The relationship has now inspired the Gelvandale Hockey Club (a team made up of players from previously disadvantaged backgrounds) to aim to tour Holland in 2014.

A few weeks after the visit, we were happy to receive 9 pallets of boxes of hockey equipment and kit that Were Di Tilburg donated to us, including 900 hockey sticks and 120 tracksuits. The teams had started with collecting the donations and raising funds before their departure, so that the shipment could arrive soon after their visit. United Through Sport is thrilled at the start of the relationship and hopes it will continue long into the future.

“The children we met today had so little and yet they were so happy and friendly and welcoming to us. It’s definitely taught me about appreciating what I have and being kinder to others”, Dutch Player, Were Di Tilburg.