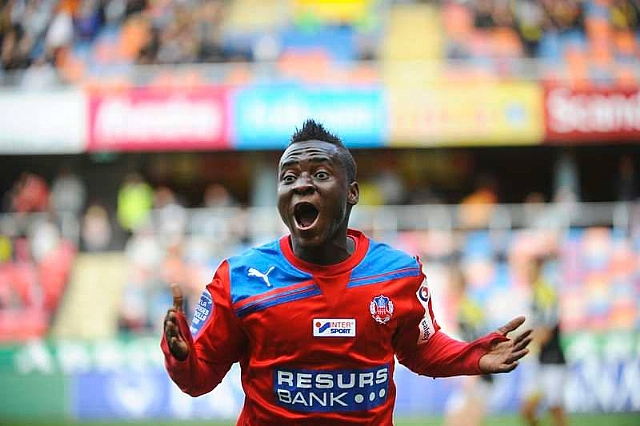 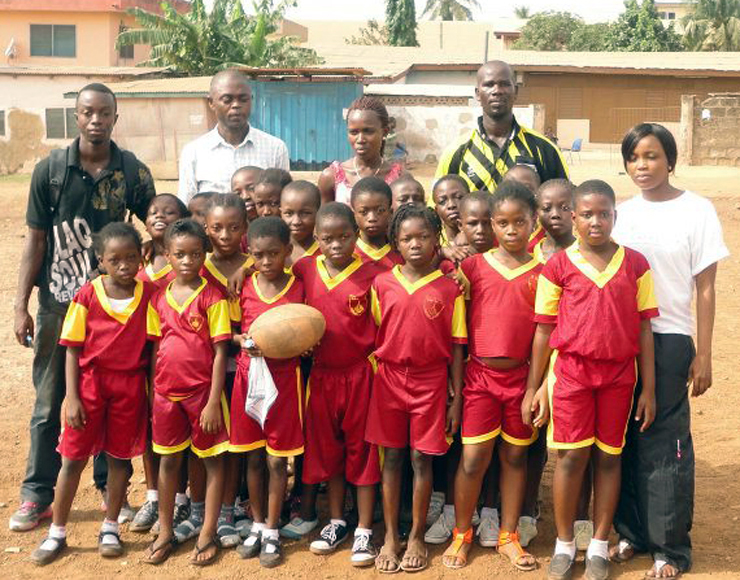 On 12th December, volunteer rugby coach, Jack Beard, organised (and refereed) a tournament for the school teams he has been working with for the previous five weeks. The tournament featured four boys and four girls teams from around Nima, a poor suburb in the Greater Accra region known for its’ bustling street market.

Ghanaian athleticism lends itself to the 7’s game of Rugby, with the boys playing full contact and the girls playing a ‘three touch’ variation. Despite the hard and dusty ground the big hits were flying in!

Rugby is a growing sport in Ghana and it is commonplace that United Through Sport volunteer coaches are asked to represent for the Ghanaian National team in organised matches both domestically and internationally.

Present at the tournament was Salim ‘Amuzu’ Amuzuloh, the extremely charismatic Director of Rugby Development for Accra. Amuzu was unable to contain his delight at some of the flowing moves and technical tackling on show under the unforgiving African morning sun.

Wearing yellow strips were Unity School, an extremely well organised team that like to run straight at their opposition. They faced the physical and strong Abawana team in the first semi-final defeating the ‘All Whites’ in a pulsating encounter fit for a final. Unity eventually triumphing 15 points to 5.

The victorious girls team came from K-13 school, stealing Queens’ crown with an emphatic and incident packed 30-15 win that you would struggle to guess wasn’t full contact rules!

Despite individual brilliance, many thought the other finalists of the boys’ competition, Wilberforce, would be steamrolled by Unity after a slightly fortuitous progression in the semis. The Wilberforce team that stood between Unity and glory took an early lead, capitalising on a loose ball with a pacy counter attack to go in front. They could have extended this lead before half time only to be disallowed a second Try, the referee citing a knock on in the build-up as the reason for the decision. The Unity team used the half time break to regroup and came out strongly in the second half, eventually seizing the glory with a 15-10 victory in a great display of skilled, breathless and committed Rugby in difficult conditions.

The teams openly conversed with each other, enjoying the occasion the competition brought before starting their Christmas vacations, many pleading with Jack to organise holiday training workshops so they can continue practising outside of term time.

The passion in young people to be involved in Ghanaian Rugby continues to grow and United Through Sport plays a vital role in this emerging sport. 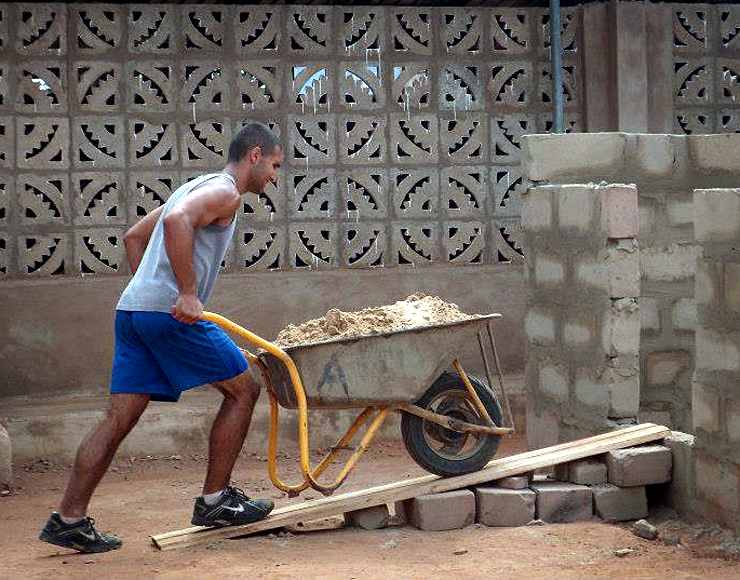 We are delighted to report our School of Excellence now have the materials on site to complete the final three classrooms. The building project has come a long way in a short space of time thanks to the efforts of all of our volunteers and friends of United Through Sport.

The rapid development at the School owes a massive debt of gratitude to two of our summer volunteers, Hannah Nisbet and Tom Edwards. Through their fundraising efforts back in Australia we were able to purchase $700AUS worth of building supplies necessary to complete the structure.

Educating the boys after school and before their football training commences, form an integral part of our goals here at United Through Sport Ghana. We seek to promote and develop the values associated with sporting excellence through better educational attainment and participation. We aim to teach our three registered teams every afternoon and when possible, in the mornings too.

Our School of Excellence is located next to our pitch at Presby Park. Given the regular attendance of our players’ siblings, it is fantastic that we will have better, cleaner and larger learning environments. Importantly, the teachers and students will have some shelter when the rainy season dares to attempt to disrupt our lads’ learning experience.

2012 has been a remarkable year for our team. With the School of Excellence bringing a new dimension to our work and the boys finally being registered to play league games and catching the attention of local academies, we look forward to welcoming new and returning volunteers with United Through Sport to build on the great achievements of this calendar year.

Next up is the arduous task of painting and decorating our shiny new classrooms… maybe our boys can help with this!

On Saturday 1st December the football boys from United Through Sport Ghana, locally know as FC Football Beyond Frontiers (FC FBF) were invited to play friendlies against the Under 17 and Under 13 teams of the Lizzy Sports Complex (LSC). The LSC academy was founded by Ghanaian born French World Cup winner Marcel Desailly.

The LSC pluck talented youth players from around Accra to play, train and improve at their excellent facilities including several 3G pitches and a full sized grass pitch with gym and swimming pool on site. To be asked to play at the LSC is a sign of the rapid development that our team has made since being registered in the league in February 2012.

Despite both games kicking off at 8am, it was already a scorching hot day in the Ghanaian capital. This did not have any impact on the pace or quality of the football on display. The Under 17’s started excellently sporting a new look 4-3-3 formation. The plan was to control the middle battleground and support the lone big front man, Figo, with support from the attacking wingers and breaking midfielders.

The intensity, discipline and hard work resulted in a dominant first period as our boys went into the half time break 1-0 up and having shocked and stifled the LSC academy side. We could even consider ourselves unlucky not being further up the score board, having missed a number of good opportunities and being denied a strong claim for a penalty.

The second half saw the home side come out strongly and were soon level after an unfortunate goalkeeping mistake, presenting the LSC forward with an easy opportunity to equalise. Our boys bounced back and were unlucky not to retake the lead with standout midfielder, Carlos crashing a long range effort against the crossbar after a fingertip save from the goalkeeper. The home side refreshed with a change of front line and soon found the back of the net twice in quick succession through incisive counter attacks and ruthless finishing.

The boys kept their heads up and rejuvenated with a number of substitutions. They pulled a goal back with a fiercely placed free kick from the visiting number 10, a left footed strike that Lionel Messi would have been proud of!

Despite late pressure the game ended 3-2 to LSC, a result that was hard to accept for our boys, whom controlled the game for all but a 20 minute spell when the home side ruthlessly scored all three of their goals.

The home side and their coaches were full of praise for the boys from Teshie, where United Through Sport Ghana are located, perhaps knowing they were fortunate to have defeated a team that showed excellent organisation and teamwork coupled with periods of abundant, inventive and attractive football.

The LSC adacemy have already shown an interest in several of our boys in this age group and with respect to the events of this game, it is easy to see why.

Although only a friendly this was an excellent way for our boys to reflect on a successful first season as a registered team.

With the foundation of our School of Excellence and some vital equipment and financial donations from volunteers and friends of United Through Sport Ghana it can be a stepping stone to greater things for a talented and dedicated group of boys.