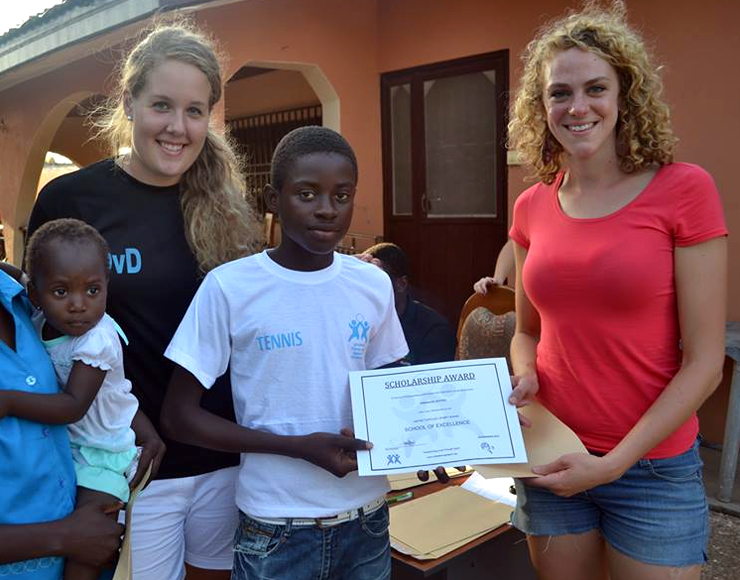 Thursday 26th September 2013 was a very special day for United Through Sport Ghana as the first ever Scholarship Awards Ceremony was held in Teshie, Accra and the very first intake of talented young football and tennis players received their Scholarships to the School of Excellence.

For the last 6 months the Ghana Team have travelled the length and breadth of the country in search of the country’s most talented young Tennis and Football players. Over 1000 boys were originally selected and this has now been whittled down to just 26 lucky boys who were awarded a scholarship for the United Through Sport School of Excellence. The scholarship will provide these boys with a good quality basic education and training in their chosen sport of either Tennis or Football. For those boys who do not live in close proximity to the United Through Sport Ghana office in Teshie, they will also receive food, accommodation and support during term times.

The ceremony was attended by the boys receiving their scholarships, their parents and family members, volunteers, coaches, staff and other boys who are still going through the selection process and hope to receive a scholarship of their own in the future. The ceremony began with a warm welcome and speech from James Dzandza, Director of United Through Sport Ghana, and an opportunity for parents to ask questions about their sons futures with United Through Sport. The presentation of scholarship certificates to the lucky final 26 boys followed, each certificate was presented by a representative of United Through Sport Ghana and the boys were accompanied by their parents for individual photos as they were presented.

Impromptu entertainment was laid on by an older brother of one of the boys receiving their scholarship who showed off his impressive football skills to parents.

The afternoon was a huge success on all accounts and we wish the lucky scholarship recipients the very best of luck in their studies and training with United Through Sport. 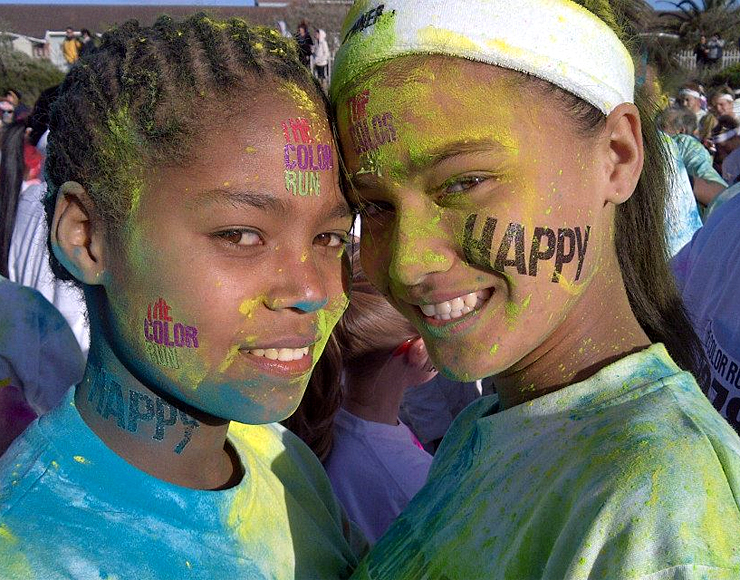 “The happiest day of my life”! This is how Tazneem, one of our Junior School of Excellence Netball players described taking part in The Color Run, held in Port Elizabeth yesterday. Tazneem was one of 25 children and 17 volunteers from United Through Sport lucky enough to take part in the first ever Color Run on the African continent.

The Color Run, billed as “The happiest 5km on the planet”, is a paint race that celebrates health, happiness, individuality and giving back to the community. So for us it was extremely fitting that we were identified as the Charity partner for the event in Port Elizabeth, as it encompasses many of the values we instill into our sports programmes.

As charity partner to The Color Run Port Elizabeth we have experienced nothing but fun and happiness since beginning work with the organizers. The Color Run team from Portugal, encompass the attitude of the race with their warm, kind and cheerful nature which made the experience for over 50 volunteers from United Through Sport working with them in the build up and on the day of the race almost as enjoyable as the race itself.

On race day, it was an early start for all the volunteers and 25 children from our Junior School of Excellence programme to get to The Nelson Mandela Metropolitan University by 5h:30am to prepare for the days events. Our children enjoyed the race with over 9000 other participants who were all desperate to be a part of this inaugural event in Africa. The race itself was out of this world for the kids, with bursts of color continually filling the air as they ran around the 5km course. Each individual had bags of color powder to throw at each other as well as various ‘Color Stations’ of volunteers shooting color at runners as they passed by. There was more entertainment on the way around with cheerleaders, drummers and fitness instructors all part of the carnival atmosphere willing the runners on.

At the end of the race the festival continued for several hours with music and big screens showing the festivities. One of the highlights for our kids was being called up on stage in front of thousands of other runners to throw more colored powder packets to the cheering participants.

It was a hugely successful day and one that we, and the lucky 25 children from our Junior School of Excellence will never forget. It was a real pleasure to work with The Color Run team and be a part of the event all the way through. As part of the legacy, The Color Run organisers have donated funds to ensure that some of those children who took part in the race yesterday will receive a scholarship to go to a top level high school in 2014. What an amazing day and what an amazing experience!!!