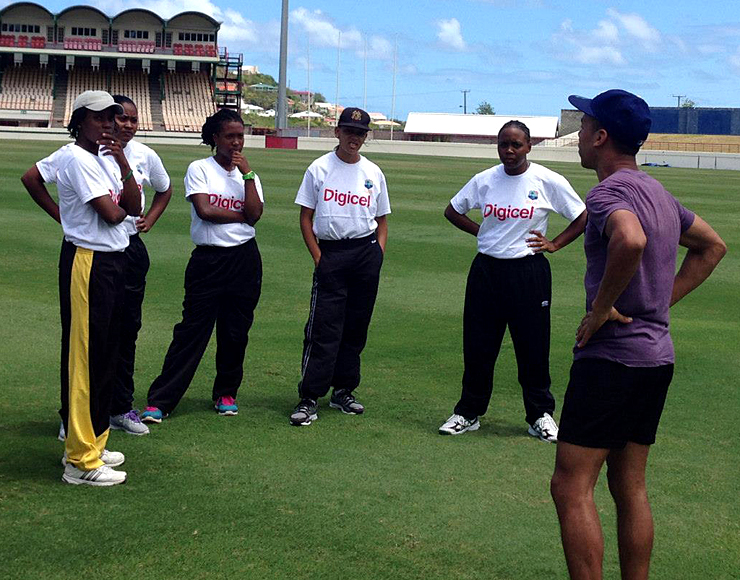 The St. Lucia Cricket Association is hosting a National Women’s Cricket Development Clinic this week, for national players and other young talented female cricketers. Our team are working alongside some of the region’s most respected coaches former players, including former West Indies Captain and Legend of Women’s Cricket Nadine George!

This two day clinic will cover all aspect of the game with the female players with technical and tactical scenarios and even media training. The United Through Sport Coaching team includes Director Joël Martin, Manish Patel, James Powell.

“United Through Sport are doing incredible things that are changing lives around the world. Through their work they have enabled tens of thousands of kids to have a better education and greater access to sport. I am a particular advocate of their work because of my close links to South Africa, where United Through Sport have been working for more than 10 years. I wish them continued success as they progress into other areas and I will support them 100% of the way”. 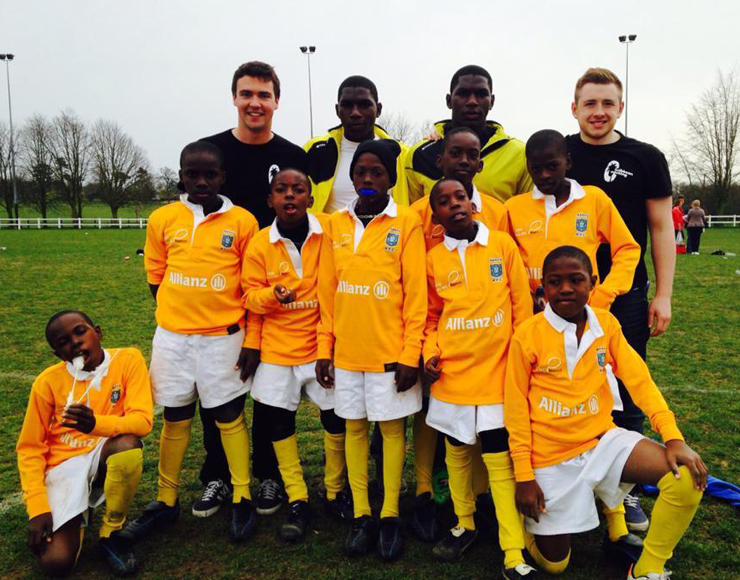 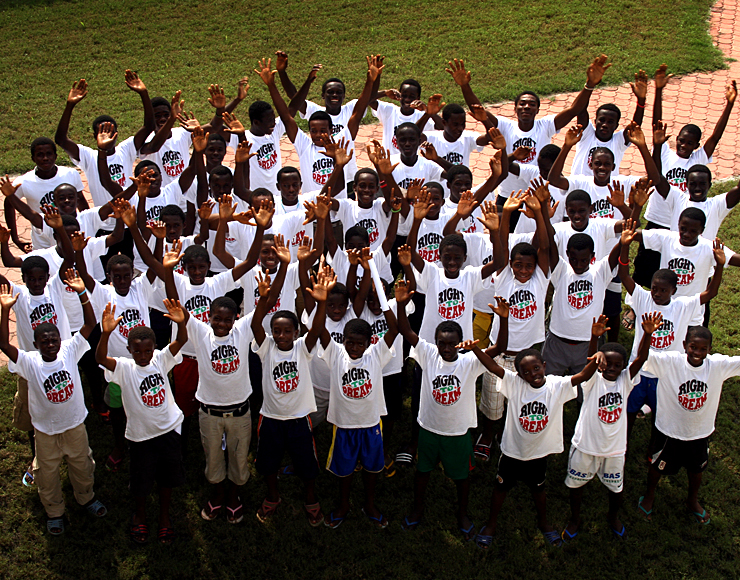 The United Through Sport Ghana Academy football team have come a long way in their short time together. This Saturday they faced their toughtest test to date. St Thomas Aquinas Senior High School in Central Accra played host to the United Through Sport Ghana Academy versus Right to Dream Academy, considered by many to be the finest Academy of Football in Africa, with both the U17s and U15s matching up against each other.

The first game of the day featured the U17 age group. A cagey start from the United Through Sport team saw a few nervous misplaced passes whilst neither team looked too desperate to take risks by committing men forward. The relentless strong African sun did not slow the pace of the game. Incisive pass and move football down the Right to Dream left flank worked space in the centre only for United Through Sport left back William to make a last gasp saving block to keep the scores level. Most of the action occurred down this side of the pitch, with right back and winger James and Stephen [respectively] combining effectively to test the Right to Dream goalkeeper half an hour into the tight contest. Minutes later United Through Sport full back James Kumah again went on the overlap. After cutting inside onto his left foot his pile-driving effort cannoned off of the bar to the relief of the helpless goalkeeper. The United Through Sport team were growing into the game, their strong midfield double pivot allowed the wingers and forwards to roam and cause problems for the opposition defence. Opportunities were narrowly missed and the game remained goalless.

Two Right to Dream midfielders were booked in close succession for cynical fouls that disrupted United Through Sport breaks. The United Through Sport right was exposed in a move that saw the Right to Dream Academy take the lead. Some slick one touch pass and move football created the space for an inviting cross that was met with a firm half volley from the Right to Dream striker. Somewhat unfairly, the UTS team found themselves behind on the stroke of halftime. This served as a poignant reminder of the quality and ruthlessly that their opponents possessed.

The United Through Sport Academy did not let their heads drop, knowing they had played the majority of the first half in the Right to Dream half and knowing they had more than earned the right to play their esteemed rivals. One half time change and rousing team talk immediately had the desired effect, substitute right winger Ibrahim controlled a fantastic deep cross and drilled a stinging shot across the goal into the bottom corner of the goal to level up the score.

The U15 game was also a tense affair. Both teams struggled to carve out any notable chances and both goalkeepers were alert to the long range efforts that each defence restricted each other to. The most notable moment came late in the second half when a well worked move involving winger Richard Owusu and Ibrahim Sulley (appearing in both games) led to a penalty award for United Through Sport. Captain and Man of the Match, Daniel Mensah sent the keeper the wrong way but unfortunately sent his spot kick just wide of the post. Retribution came for the United Through Sport Captain as his excellent reading of the game allowed him to make an excellent goal line clearance and preserve the goalless scoreline, which was how the game finished.

The effort of both United Through Sport teams were fantastic on the day and made a big impression on the visiting side and their entourage. Results such as this one serve to remind the players that hard work can lead to attainable success and that nothing is impossible. In recent Summer tournaments the Right to Dream youth teams have gained creditable results against such worthy academies as; AC Milan, Boca Juniors and Manchester United. With many of the Right to Dream players expected to one day make the professional grade, these results can inspire our players to continue working hard towards this ultimate goal, shared by all at United Through Sport Ghana. 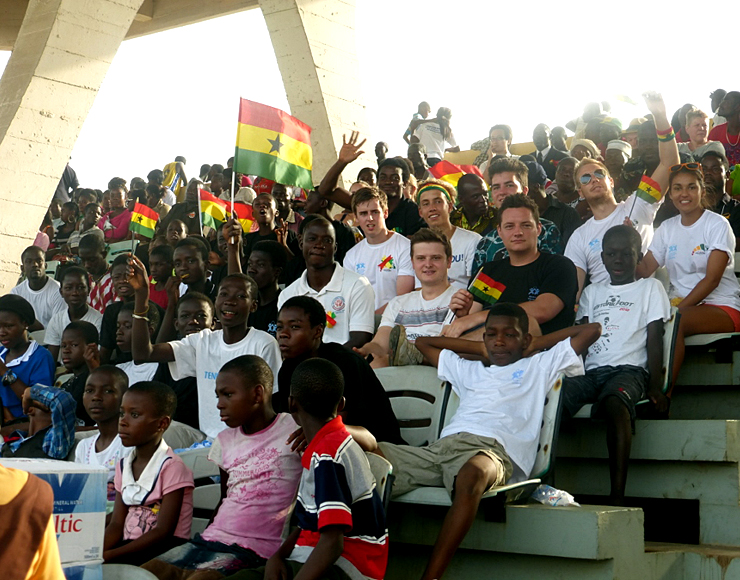 To the average person it is probably any other day, but March 6th is probably the most important day in any Ghanaian’s year. Despite this wonderful country being so deeply religious, there is something else which Ghana values above the rest, her independence and young heritage as a Republic.

March 6th 1957 marked the day that this nation’s people, led by National hero Dr Kwarme Nkrumah, won its’ freedom by the British Empire. Before this date, Ghana had been known as the Gold Coast and was most notable for her brutal history involving centuries of exploitation from the land and people, through taking of gold and mineral reserves and also the taking of the people. The greatest crime against humanity in history emanated from Ghana’s beautiful coast. European forts were utilised for the trans-Atlantic Slave Trade, the horrors of the Middle Passage were not much worse than the conditions people from West Africa were kept in at Castles such as Cape Coast and Elmina in Ghana’s Central Region.

Volunteers came to spectate, whilst Ghanaians came not only to celebrate, but to remember the struggles their forefathers went through for their right to freedom. The national slogan of ‘Freedom and Justice’ stands proudly above the Black Star Arch in Accra’s Independence Square, opposite to where yesterday’s celebrations commenced.

For nearly everybody in the United Through Sport Ghana entourage this was their first chance to experience Ghana’s Independence Day in the capital. Our residential Academy players come from all over Ghana. We have representative players from the far North much closer to Burkina Faso than Accra. Several players emanate from the Eastern and Volta regions touching Togo,whilst large contingent have arrived from Ghana’s second city, Kumasi and the surrounding ‘Ashanti’ region, an area deeply affected by Ghana’s centuries of toils and tribulations with Colonialism.

An ominous morning greeted the crowd. Grey skies threatened and nearly succeeded in turning a proud day to one of farce. The UTS representatives were amongst the capacity crowd that witnessed the other side of Ghana’s hot tropical weather, the deluges of rain that descend in an instant. The relentless rain and wind tried its best to mar the celebrations of this special day.

The experience Ghana imposes on her visitors is something that leaves its mark. The strength and honour shown by the schoolchildren, armed forces and emergency service representatives that marched on behalf of their people in Black Star Square was a true sign of patriotism. These marchers, [upon receiving a standing ovation on their exit from the square] responded in the most Ghanaian fashion one could imagine. In no way deterred by hours of withstanding ferocious gales and rains, they happily danced for the thousands that had packed into the stands of the square. Together the servicemen in an outrageous display of patriotism and comradery absorbed the force of the storm and used the energy to entertain their wet and admiring onlookers.

The United Through Sport Ghana players, staff and volunteers did not witness a typical Independence Day comprised of proud speeches and order [the public address could hardly be heard over the winds]. The day epitomised the other facet of Ghana that its’ visitors come to love, the ability that all Ghanaians have to improvise something that seems ruined into something special and memorable in its own way. Whether this is small children using a ball made of trash and string to play football on wasteland or the serviceman standing tall and dancing together to salvage and savour a National Day of memorial and gratitude. The citizens of this young country really embody everything that people come to love and admire in Ghana.