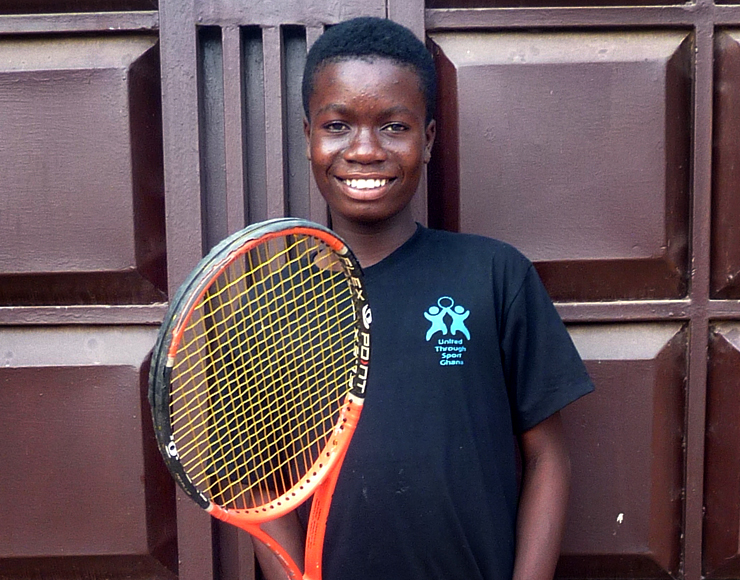 Earlier this month, United Through Sport Ghana’s youngest Tennis player, Reggie Okai was selected to join the Ghana National Tennis Team to travel to Togo for the ITF West And Central Africa Junior Championship Qualifiers. The tournament took place from the 11th to 17th January 2015 in Lome, Togo – Reggie was part of a 10 player team that was called up to the Ghana National Team. He joined fellow Ghanaian players to compete alongside rival tennis players from across west and central Africa.

As a novice to this level of tournament, Reggie didn’t let the sense of occasion phase him. He played some incredible matches, defeating some extremely talented opponents from all over west and central Africa.

As the tournament got into full swing, Reggie flew through his rounds and surprised many of his fellow team mates as well as coaching staff. Reggie and the rest of the team all played exceptionally well, most of his colleagues had played in Junior tournaments previously however this was Reggie’s first junior tournament. As the matches began Reggie delivered consistent winning performances in both the singles and doubles tournaments. He completed the tournament in fifth place overall which was a fantastic achievement alone but his place in the final standings meant that Reggie was also the only member of Ghana national team to qualify to play in the forthcoming ITF/CAT African Junior Championships which is being held in Tunisia in March 2015.

Everyone in Ghana is extremely proud of Reggie and his fantastic achievement, we wish him all the luck in the world in the Junior Championship Tournament and will be supporting him every step of the way.