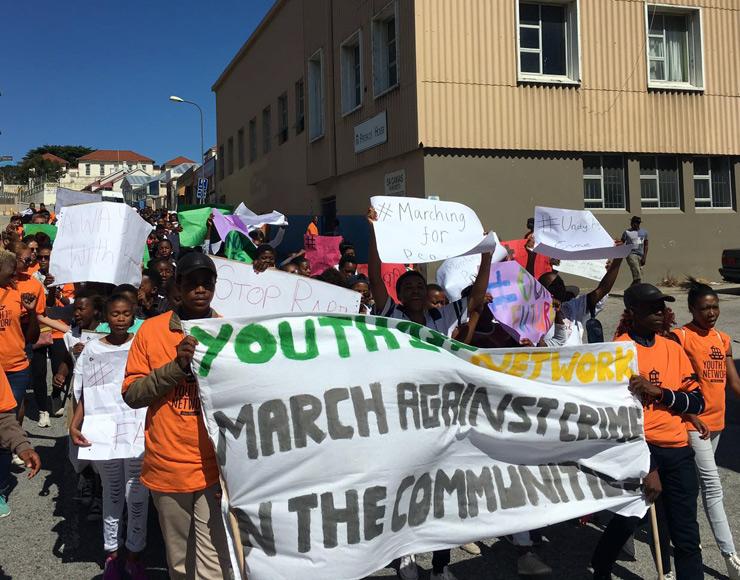 “The children are the future”- this is a statement that just cannot be disputed. It is always so heart-warming and hopeful to see young people standing up for what they believe in, particularly when it comes to fighting for their rights!

The young people of the Nelson Mandela Bay showcased this on the 20th February 2016 as they participated in a “Youth March Against Violence” to voice their concerns about all the violence and crime happening in their communities. Towards the end of 2015, United Through Sport, alongside two other local NGOs, started a vibrant and active youth network to promote, develop and create opportunities for the youth of Nelson Mandela Bay. The Youth 1st Network and its members used this platform to engage with the local municipality about the unsafe communities the youth live in.

This was done in the form of a march where a petition was handed over to a representative of the Mayor.

On that Saturday morning, over 500 youth marched in the streets of the CBD, hoping their voices will be heard. The petition signed requested more visible policing, less tolerance of illegal behaviour, the erection of fully functional CCTV/cameras to cover the streets and public spaces (which will minimise the need for human witnesses), more protection for eye witnesses of crime, a serious crackdown on gang leaders, more community cooperation in bringing criminals to justice and a concentrated effort to reduce illegal gun possession, ownership and smuggling.

Leading up to the event, the Junior School of Excellence beneficiaries at United Through Sport spent their life skills and mentoring sessions discussing violence; the causes, results, impact on society as well as prevention options. The children are affected by crime on a daily basis in their communities, and sadly so, even in their own homes. The key solution that the beneficiaries came up with to minimizing this issue was education. The children see education and employment as key factors to putting a stop to crime in their communities.

Being involved in the march and signing the petition made them feel empowered that they can be the change they want to see in their communities. “Holding my poster up, walking with the group gave me the spirit that through my actions I can make a positive change in the world” – Anifa, 12 yrs old, United Through Sport Beneficiary