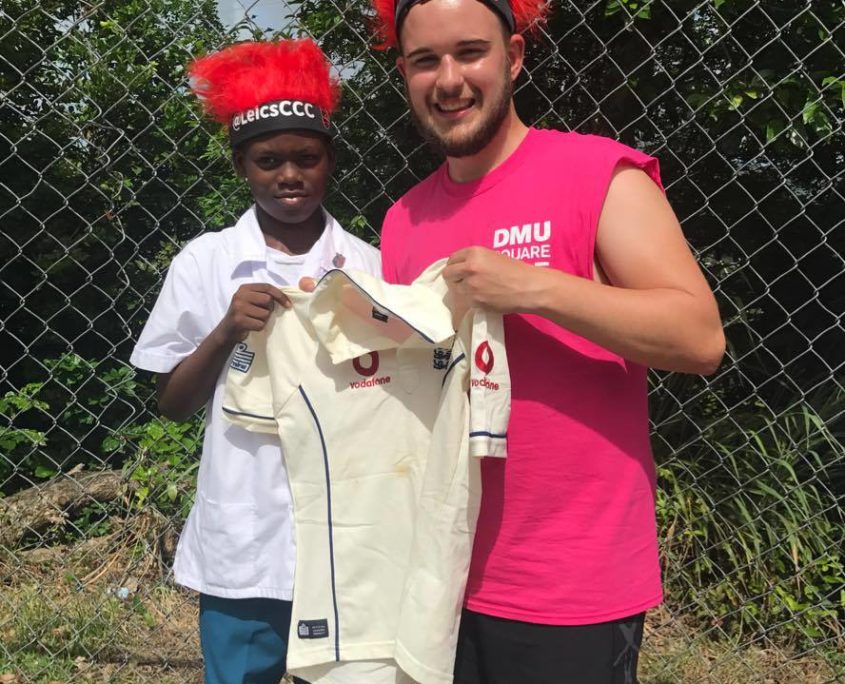 A touring cricket team from De Montfort University took time out from their busy tour schedule to spend a day within the United Through Sport projects.

The day was designed to display the UTS development model: from the mass participation stage up to competition level and give the De Montfort players a chance to impart some expertise to our students.

Accompanied by UTS volunteer coaches Jamie Inglis, Freddie Nehls, George Thomson and Director Joël Martin, the squad first visited our grassroots project at Bocage school. The arrival of a large team of English cricketers caused great excitement within the school: the session had been scheduled for 30 children however another 30 came to watch, even the school’s principal participated in the session! The De Montfort players were able to do fielding, bowling and batting drills before mini-games to finish. Perhaps more essentially the team bought a vast amount of specialist equipment which they were able to donate and will be of benefit to the children in the school for years to come.

The team were then taken down to our after school project at the SDA academy, where many of the players were scheduled to face De Montfort in the weekends fixtures. Here the guys were able to create more game-like scenarios with our players and really put them through their paces, leaving our visitors notably impressed with the talent on offer.

We finished the day at Gros Islet Cricket Club, allowing the De Montfort player so get in a quick practice net.

“United Through Sport were great to work with as they were able to put in place all of the coaching sessions, school visits and fixtures, which was a real help.

“We visited a sports academy which schooled the upcoming talent of the island and we donated two bags of kit to them, which you could see they needed.

“Being out there witnessing this, just shows how privileged we are here in the UK, having access to all the kit and equipment we could possibly need. It just doesn’t compare.”

We would like to thank De Montfort University for their generous donations of cricket kit and gears to our children and projects and hope to continue working with them in the future.

Tyler and Spakes, two United Through Sport staff members, recently came back from a two week trip to Germany supported by funder Go Ahead! This German organisation finances the holiday programmes that UTS runs four times a year during the school breaks.

The trip to Germany saw 8 South Africans doing a 5 city tour in the “Blickwechsel” (meaning ‘Change of View’) campaign that put a twist to the normal Global North to Global South perspective by inviting partners from Southern Africa to Europe.  Participating in the trip were representatives from four organisations that Go Ahead! supports in South Africa. This was an opportunity for the partner organisations to learn more about Go Ahead! as well as the members of Go Ahead! to physically meet the implementing partners and get more insight into the different programmes and the work done in South Africa.

In each city visited, there were structured activities for the touring group and a lot of social opportunities to mingle with the local members, which were mostly University students. As the organisation with the most experience in volunteerism, Spakes and Tyler were heavily involved in school workshops in Heidelberg about the topic, highlighting the benefits of volunteering to the individual, the impact on the receiving in-country organisation as well as the importance of the sending organisation in facilitating and preparing for the volunteer experience.  Other activities of the educational tour included panel and round table discussions on topics such as the education systems in South Africa and Germany, the stigma of HIV/AIDS in South Africa and discussing movie screenings related to volunteerism. The organisation Go Ahead! Celebrated 10 years of existence and there was a big party in Berlin, halfway through the tour, with everybody enjoying “Mzansi” music hits and doing the newly learnt South African dances.

Culturally, there was quite a good exchange as the South Africans tried out the local cuisine of Bavaria and the Germans were practising the clicks in the local South African languages. On arrival in Erfurt, the group was invited to give a cultural presentation of South Africa; Tyler & Spakes were amongst the three that were leading this presentation. The tour was arranged in a way that in some cities, the group stayed in youth hostels but in other cities they stayed with the university students, which had a further positive impact on the culture exchange.

Having such a good balance between the tour programme work and the social aspect, the two UTS members represented and presented the organisation well, and gave a lot of energy and effort in everything to strengthen the relationship with Go Ahead! Spakes and Tyler had an amazing time in Germany and appreciated the historic buildings, the structured and disciplined ways of the Germans but of course missed the sunny weather back home.

“I was inspired by the ordinary young people I met pooling their efforts for a good cause, putting in so much time voluntarily to support the work that we do and of course we formed such good relationships with the members of Go Ahead! I am truly grateful for the opportunity and I know for a fact that we left such a cool impression of South Africa in Germany!” –Spakes

“Anything is possible in life.  After my visit to Germany I see the world in a different way. I had fun and enjoyed every moment I shared with the University students and fellow participants. I had the chance to experience how other people live and do things in a different country. The passion they showed to help other people is indescribable. My highlight of the trip was the humility and love they showed to us and that we are all equal and we must treat each other with respect. Thank you UTS for the opportunity that you gave me. I will forever be grateful for the rest of my life.” – Tyler