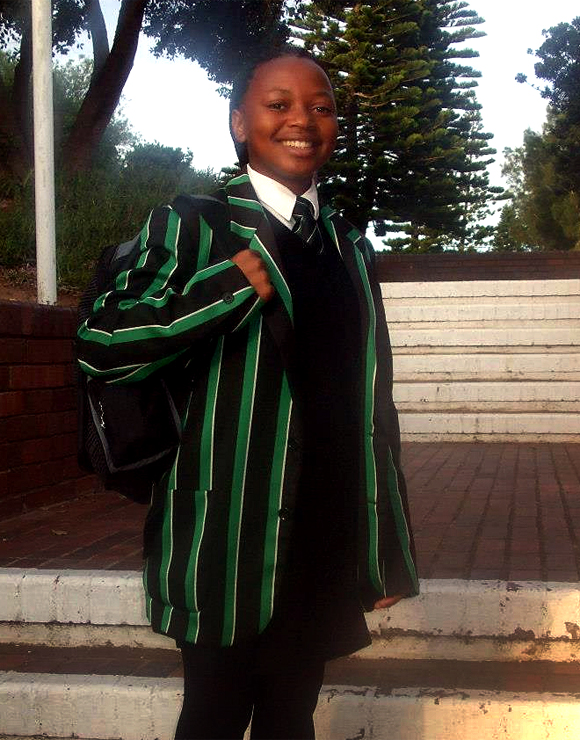 Supported through our School of Excellence Programme in South Africa, Lindiwe comes from a typically tough background having grown up in the township of Kwazakhele in Port Elizabeth without ever knowing her father. Her mother has never worked formally and spent most of Lindiwe’s life away in her original home town of Mount Ayliff in the Eastern Cape. As a result Lindiwe has been mostly brought up by her older sister, along with her two other siblings and nephew. Her older sister runs a ‘Shebeen’ (township drinking bar) in the informal settlement of Gqebera and Lindiwe sleeps in the store room with her cousin, surrounded by beer crates.

Despite her tough circumstances, or perhaps as a result of them, Lindiwe stood out in the United Through Sport Programme as a talented Netball player with an attitude of true grit and determination to succeed. As a result, United Through Sport secured a scholarship for her part way through grade 9 to Pearson High School in 2011. In her first term, the gulf in education looked like it would be too much – she failed every subject scoring only 11% in maths and 13% in English. Yet, Lindiwe had been given this opportunity for a reason and her determination came to the fore. She worked for 5 hours every night to complete her homework and do extra catch up classes , every Friday she would take an English book from the library and read it over the weekend and return it on Monday. Gradually her results improved due to her hardwork and perseverance. Lindiwe is now in grade 12 at Pearson, she is an active member of the debating society and represents the school in Netball. Her ambition is to become a Lawyer and she has applied to four of the top Universities in South Africa. She is on track to be amongst our first group of children to go to University each of whom will be the first in their families to do so.

Lindiwe is not a stand out child of our programme, but rather a typical example of the children we work with who come from such difficult circumstances yet have so much potential to completely change their own lives and the lives of their families for good.