Jeanette Morelan is a United Through Sport volunteer who has been teaching on our project in South Africa. She also keeps a blog, “The Blessed Life”, in which she has recently written about a day in the life of a UTS coach. Here’s what happened.

J: Why did you decide to volunteer with United Through Sport?

I decided to volunteer at UTS because I fully believe in their goals and wanted them to help reach them at 100%. By placing children in the townships in the center of the attention, United Through Sport is taking care of the future of South Africa. —Julian S.

I’ve always wanted to do sport-related volunteering, and United Through Sport really stood out to me. After seeing a video and some photos of the kids that UTS was working with, it sounded incredible and described everything I wanted to do as a volunteer. —Jess T.

Coaches go to 3 schools a day and do 14 schools in a week. When we arrive the children are already waiting to grab the equipment and take it to the different sports areas. Every school is different, so even though we plan our sessions beforehand we have to be able to adapt to circumstances such as playing conditions and ability and their capacity to speak English. Every coaching session is really different! Traveling from different schools can be tiring, but we always give 110% as the kids want to learn and enjoy the sessions. As coaches we discuss afterwards what can be improved and our experiences so we can be more prepared for the next week. It’s a busy day, but we really enjoy it and love getting to have different experiences and meeting different kids. —Jess T.

I wake up around 8:30am to have a shower. At 8:45 I’ll have a simple breakfast, just a simple toast with cheddar cheese. After the breakfast we usually have about a hour left to relax/chill and I use this time to contact my family and friends in Holland. During a coaching day, we coach 3 primary schools. Normally it depends on the school which results you’ll reach. At some schools you are able to really improve the skills of the kids, sometimes it’s just a victory keeping them all in one place! After finishing the coaching sessions we go back to the UTS accommodation where we can fill in the rest of the day after dinner at 5:30pm. We have a lot of fun visiting different places in Port Elizabeth or playing pool or table tennis back at the house. At the end of the day I feel really happy that I can sleep and repeat this for five times in the week. —Julian S.

J: What’s your favorite part about being a coach?

I love the excitement on the kids faces as the UTS bus pulls into each of the schools. They all love the coaching sessions, and are so excited to see you each week. I’ve been surprised at how quickly I’ve become so attached to all the kids we coach, and was genuinely gutted to have to say goodbye at the end of 10 weeks. The amount some of them have improved week on week is unbelievable which is so great to see. —Jo B.

The enormous satisfaction that the kids show by smiling, hugging you as a coach before, during and after a coaching session just because you took the time to be with them. Also when kids make really big improvements. When you can spot some great results it makes it one of the best jobs in the world! —Julian S.

What are some of the challenges associated with coaching?

I would say that the most difficult, and challenging, part of being a coach was keeping the kids under control and listening to my instructions. Whilst it was very frustrating, I found that this provided a good learning experience for myself as an individual. —Felix M.

The biggest challenge is to realize that some kids are already too much influenced by their environment to realize how important education and sports are. Sport creates on its own a great opportunity for people to develop themselves and to create a better future. Sometimes this is hard to communicate for kids that have never been taught the value of sports or education. It’s hard sometimes to try and convince them to leave their current ideas and way of living. —Julian S.

How do you think that United Through Sport is making an impact?

We can see the positive difference that it makes first hand on both kids’ ability to play sports and also their confidence and attitudes toward each other. When we recommend children to the Junior School of Excellence, we know that it could effect the course of their entire lives and we can see that they take the opportunity very seriously. —Imi P.

United Through Sport makes a difference by brightening the days of hundreds of kids each week by bringing them together for some time of sports and fun. When they’re with us, they can leave all of their problems and issues that they might have at home and spend some time receiving mentoring and coaching that they would have never had before as well as enjoying time with their friends. —Chris B.

What are some things that you have learned as a coach with United Through Sport?

To not judge a person before you know their story. Sometimes you get really surprised about what these kids have to deal with. I expect that if we as people from first world countries had to deal with their circumstances we would probably behave the same. —Julian S.

I have learned more things about myself whilst here in South Africa than I have about the place and its inhabitants. I know now more about my personal limits and strengths, and that people will listen to me if I just use the right words. This experience has been the most valuable of my life so far and I will always treasure it. —Felix M. 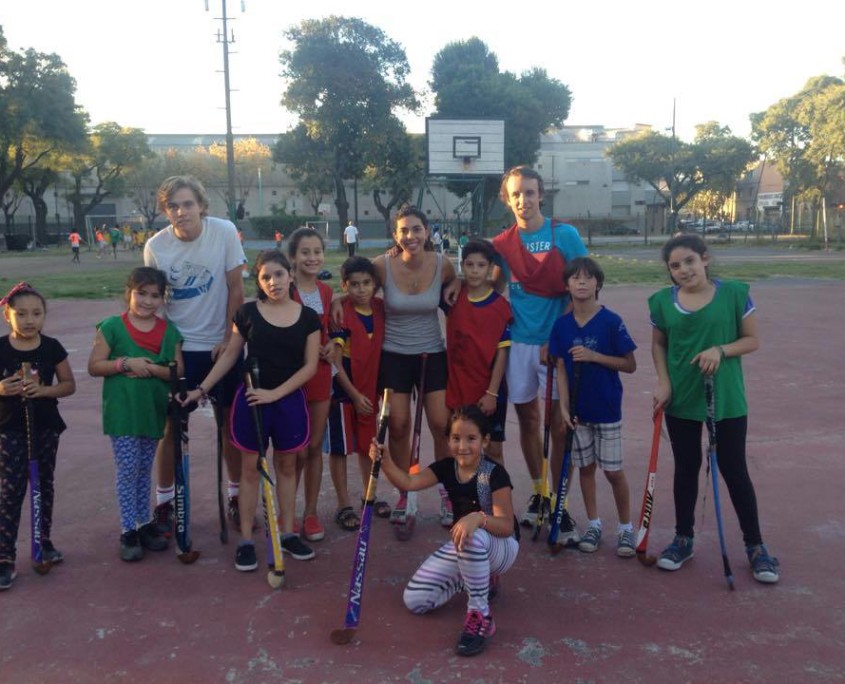 Following an incredibly generous donation of hockey equipment to United Through Sport Argentina, our Director, Alejandro, had a wonderful idea. He thought about hockey in Buenos Aires and realized that there simply were not enough opportunities in the area surrounding Pereyra Park. So, Alejandro said “ Why don’t we run our own Hockey School at the park for free and open it up to all the kids living in the neighborhood and the shantytown next to it?